I’m mostly trying to keep this blog for more creative writing, so at first I thought, “this isn’t a great topic.” But then I thought about it for half a second and realized that Pokemon’s been a huge driving force and inspiration for me for a good 17 of those years, so it hella counts.

I first heard about Pokemon from a friend, back when I was… 8, 9? There was a promotion going on, and I think Walmart was giving out posters to get kids into it. I really had no idea what it was, but there were 150 of em, so me and my sister thought it was really cool. I didn’t get a Gameboy until Christmas 1999, so I could only play it when I borrowed my friends’. But when I finally got my own… 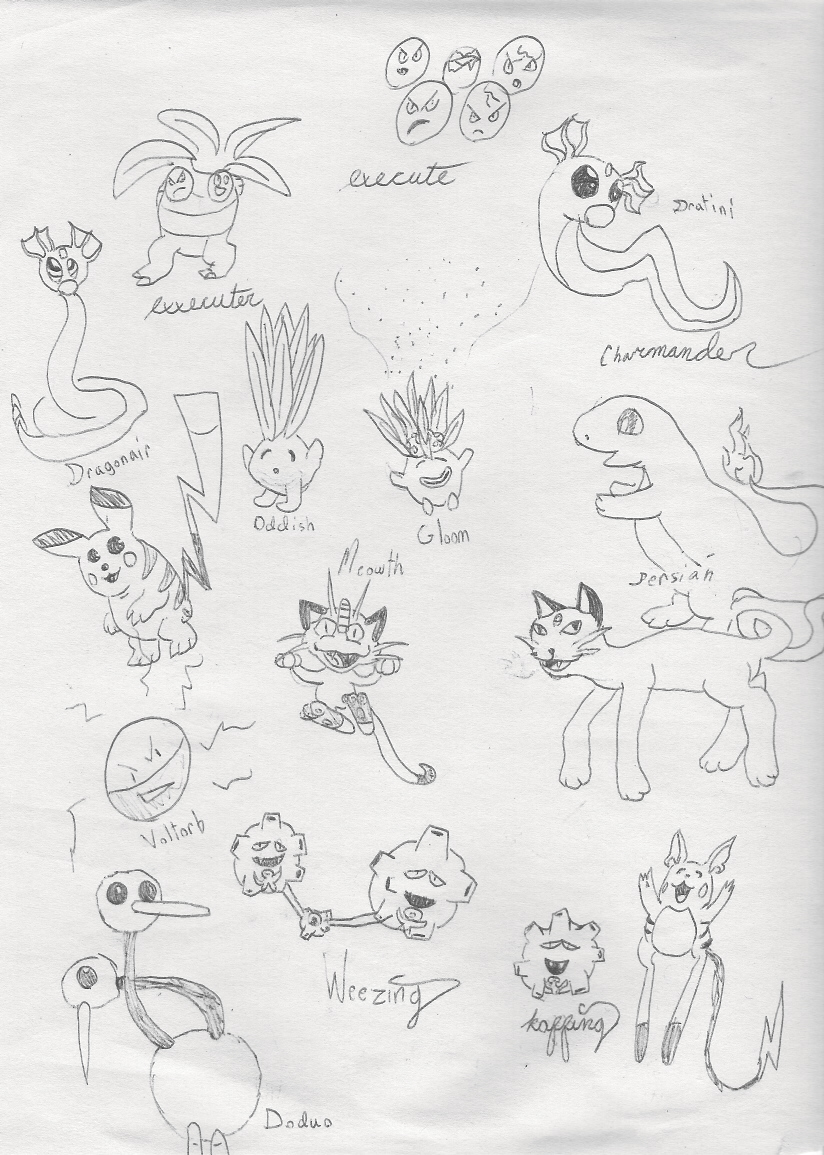 I was really enamored. I’d been into things like Spyro the Dragon, and Sonic, but here was a game that had a ton of creatures! My favorite!

(Actually, I went through a brief period before I got the games where I said I didn’t like Pokemon anymore. I don’t even know why. Maybe I was just annoyed I didn’t have the games yet. Kids are weird and fickle.)

Anyway, I spent basically all of my free time drawing Pokemon. That’s the main thing I drew from when I was 9 until I was 23, and I moved onto my original work, finally. But man, I learned so much from it! I spent countless hours just staring at the Pokemon cards and trying to copy the poses from them. There was something mystical and wondrous about them, an appeal that’s timeless. I’m lucky enough to still have all my old cards! The art’s all pretty old, but still really neat to look at.

Say what you will, but most Pokemon designs are super clever and appealing. There’s a huge variety in shapes and sizes and colors, and they’re so smart with how they combine ideas. It was definitely a huge inspiration to me, design-wise.

What helped me start figuring out my own design sense was when I had a Pokemon group, and suddenly there were thousands of members, and there were only hundreds of Pokemon to choose from. It meant I had to be clever in distinguishing different Pokemon via their body type -- it meant I had to take the design and make different iterations that were distinguishable via silhouette. It meant taking the core idea behind a Pokemon and switching up pieces of it to make it more interesting, or to work with a certain character theme. Really, that’s how I ended up training myself for my original design work. I had to think outside the box to make a Pokemon stand out! But there, I had a template to work with. In my original stuff? I’m the one who has to make both the templates and the variations of any given species, in order to give others an idea on the ways they can make characters. (My world, Floraverse, is open under the Creative Commons, in case you weren’t aware!)

I’m so glad Pokemon exists. It’s really nice to be granted a playground for your imagination, and Pokemon certainly delivers. Also, if we’re talking about the impact it’s had on my life: all of the important people around me are people I met via Pokemon, years ago. It’s also how I met so many of my friends. And I won’t lie, I did get a little emotional during the Pokemon Direct, showing off the past 20 years of people bonding and having fun together…

A year or two ago, it finally struck me what the point of Pokemon merch and dolls is. I mean, besides the fact that people want it and Nintendo wants money. What I’m saying is, it FINALLY hit me that people are buying a thing to remind them of something. Having a doll of a Pokemon you love is having a doll that inspires a memory or feeling that makes you happy. Having good feelings tied to the game translates into having good feelings tied to dolls. So, it’s like you’re being sold fun memories, almost. I don’t know why it took me so long to understand that, but when it finally clicked, I felt like… well, it’s easy to understand why people like collecting things, when you consider it like that. (I have no idea where I was going with that, but I just thought it was interesting.)

I feel like there’s a lot more to be said, but I don’t really know how to say it. Even though I’ve been trying to move away from being known as “the Pokemon fanartist” so I can be known as “Floraverse illustrator”, there’s definitely always going to be a special place in my heart for it. (In fact, I’d been missing getting to draw Pokemon, so I started drawing all the GSC Pokemon in their original palettes, for fun. I’m currently at Furret. 3 months to go for the rest of that generation!)

I’m gonna end this post early so I can play a bit of Red on virtual console. It’s been a long time! I’d say, something like 15 years. Man.

Happy 20th anniversary, Pokemon! Maybe we’ll get more than like 70 new Pokemon when Sun and Moon are released, and maybe they won’t all get spoiled this time. (Please…)