Warning: NSFW topics and art discussed in this post!

I had no idea what to write about today until one of my friends suggested I talk about Andre's butt. I'm not quite gonna do that, but I will talk about the adult work I draw in order to make ends meet and pay the bills. (Well, it's more than that to me now, but I saw it as a bill-payer for a long time.)

Sometimes I get surprised because I run across the occasional person who thinks less of an artist for drawing anything erotic or sexual or adult in nature. I've been doing it for so long that I genuinely forget there are people who think you shouldn't do it, or who think "talented" artists don't do it. There's nothing behind this besides the gut feeling that somehow something sexual is something lesser, something that doesn't deserve equal recognition as part of the human experience. In my experience, it's super ingrained in a lot of North American culture, but I like to forget about that because it's kind of upsetting that so many people feel that way about it.

I had a friend at the time who I respected very much, but who was staunchly against anything adult. Eventually he found out that I'd been starting to draw porn, but worse: I'd been drawing Pokemon doing the nasty. Also, he loved Pokemon. Oops! He was really upset by it, and I was really heartbroken that I'd upset him. There was an entire week between us getting to talk again due to some circumstances at the time, and when he came back, he basically begged me not to draw Pokemon like that again. Draw the human characters doing it, instead, if you absolutely must, he begged.

That was so hard for me to understand! Why did it matter what my subject was? I didn't really like drawing humans, because it wasn't fun and I wasn't good at it. I liked drawing creatures. So, that was the way I was going to express it. It's not like they were real! None of it was! That was the entire point: I could escape into a drawing instead of doing anything real with any person. I had these safe creatures to use as an outlet!

I think that became a pretty important defining moment of my life, because I essentially decided "fuck this" and did what I wanted to do. I really didn't like being told I shouldn't do something that wasn't hurting me or anyone else. If someone didn't like it, they could just not look at it. Not my problem.

Backing up a little, I had to wade through so many adult commissions about subjects I wasn't particularly into. So, so many. Not to knock any one person who commissioned me, though! I tried very hard to have fun with the works I did for other people by playing with color or composition or something artsy, but in the end, I much prefer drawing my own ideas. (Some people are the opposite, and that's kind of amazing to me! I have no idea what it's like.)

I took a look through my adult works from 2004-2012 a couple of months ago and man, they are so embarrassing. It ranged from upsidedown dicks to buttholes and taints in the wrong spots to so many other awful mistakes because I just didn't know what I was doing... for a while. A long while. (I didn't want to look at real porn of real people for ages.) But, whatever: I learned from it all, and people seemed to enjoy it, so I don't regret it or anything. I mean, doing adult work is what paid for my bills while I was going to college, and then again when I was paying back my loans. And it pays for me to keep working on my clean work, now!

I ended up starting the NSFW Forbidden Flora Patreon (and later its public site) as a means to explore NSFW work without having to take commissions of other people's characters. I started out making some comics that were okay, but my heart wasn't fully into the subject matter. I didn't know what it meant to make an adult comic I cared about a lot. I just had ideas on what other people wanted to see, so I kind of made comics that danced around those ideas, while clumsily trying to get better at writing characters and plotting porn. It was difficult. I'm not so fond of my earlier tries, but at least I got to learn from them.

I think the epitome of this idea of pleasing others was starting a comic where I had the audience vote on what happened next. It was fun for a while to have others participate, but then I realized I couldn't get my heart invested in the story because it could change at a whim. It was a lot of safe stuff that made it hard for me, personally, to feel much about the characters. I felt bad leaving it half-finished because so many people enjoyed it! But I needed to take a break, because the pages were very time-consuming and I just wasn't feeling it.

And then I finally figured it out. I'd been drawing all these comics about things I thought other people wanted to see. What did *I* want to see? I didn't even know until I started 'Beleth's Potion', which was just a one-off page about dick-growth of hilarious proportions, at first, until someone made an offhand comment that made me decide to make another page. And then I got more comments where people were wondering what happened next, and it got me thinking: what would happen if Beleth were to reluctantly agree? How would that happen? Would a bribe be involved? A bribe would definitely need to be involved, because Beleth is largely asexual and this wasn't up their alley. And then Orobas accidentally became funny, and I realized: well, of course she has to have a sense of humor. She's around Amdusias and Beleth all the time. Someone has to laugh. 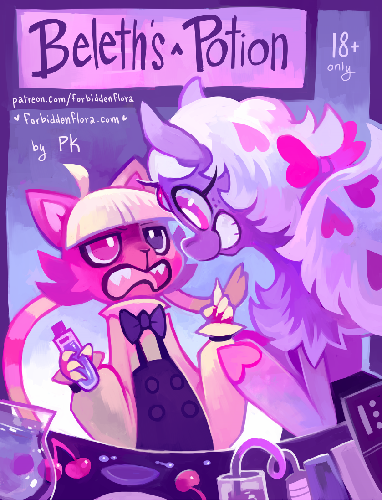 So I got invested, really invested, because those characters were all relevant to my brainstorming and plotting of my clean story at the time. Suddenly, I had a stress-free environment to develop these characters, in a way where canon and intense plot wasn't treated so seriously. So I felt super free to just explore their personalities, what they cared about, their relations to each other--and also, sex was treated in a casual way! I really, really liked that. Suddenly I had a reason to care, and I wanted each page to be really interesting, or I wanted to draw faces that made me laugh. Or I wanted some dialog that made me laugh. Something that engaged me needed to be present on every single page. I decided my goal was for it to be fun to write and draw, or I was doing it wrong. At that point, it felt like something had been unlocked, which was incredible! I had so many ideas falling out of my head for future chapters that I felt frustrated at the snail's pace it felt like I was updating at. (6-7 pages per month wasn't bad, but it felt so slow because of how much work I had been putting in the clean Floraverse stories!)

Anyway, after finishing Beleth's first forray into an extended adult comic, I wanted to explore Orobas and Amdusias's relationship next with the comic 'Something Greater'. It felt really important to get to explore their first time together, continuing off from one of the main clean comics where they both go back to Amdusias's place. I got to mess around with the contrast between their relationship as it started out, and their relationship as it is now. It was a challenge to write about the first time with a partner who really wants to have sex with someone, but who has absolutely no idea how it works or what it's like or what you're supposed to do or anything like that. In real life, it's super awkward. First-time sex isn't super sexy for most of us, and a lot of comics don't really get it right. It doesn't always look like a fun time, especially if your partner isn't outwardly happy about much. I took extra care to handle the consent much more delicately. And…success: it was really fun to write, because there were misunderstandings on both ends (no one's perfect!), but they got resolved maturely, and I got to write about feelings. I love writing about all of those things. 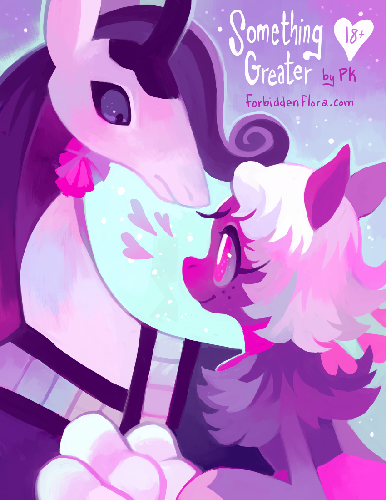 That brings me to now! As of the time I'm writing this, I've already finished page 6 of chapter 3 in the Beleth/Orobas/Amdusias Forbidden Flora adventure - 'Imagine That'. I think 3 pages are up on the site right now. I'm 1000% pumped about this chapter. I've been planning it for months, and so far it's been just as fun as I've imagined it would be. Though the first 5 pages are setup for the next… I don't know, 4-5 chapters, they've still been fun to write! I've started to realize that the more invested I get in the personalities and context of the situations, the more I care about the porn, even if I don't care about the fetishes in it.

And now that I'm absolutely sure of the kind of adult work I like to write, I get to keep doing it and having fun providing stories for everyone for basically forever. Yes! It's win/win. 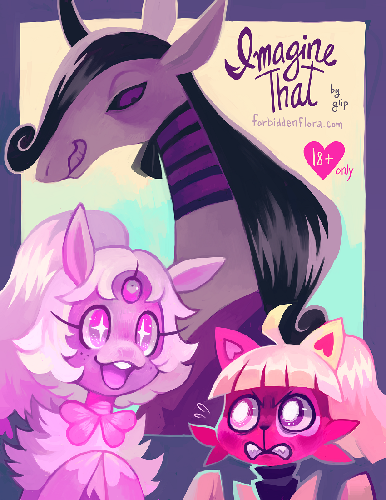 I really like seeing progress and growth in personalities. As people, we're always changing into something else. Sometimes people take a step back, but most of us end up taking steps forward. Maybe not all at once, and maybe not all in the same directions, but we keep going and trying.

I want to try to capture that. I like writing about feelings, about emotions, about conversations and relations to peers and friends and strangers. I like being able to explore sex as a casual topic between friends, because I don't like when I remember that so many people see it as a despicable thing. I'd like it to be just a little more normalized, for everyone. I'd like if people didn't feel weird for not wanting to have sex, or for wanting to have it all the time. I'd like if people felt like it was fine to just live in their heads with really weird fantasies, or to only be interested in vanilla stuff. I like when differences coexist without one trying to dominate the other. (Unless, of course, that's your thing.)

It's a lot to want to capture, but hopefully I have many years left in which to try. I'm just really excited to finally have a cast of characters that I actually want to put through these situations, where I'm mentally invested in how it turns out for them and what would be 'realistic' given the circumstances. That's what makes storytelling fun for me, and I was remiss to not think of it that way sooner!

But (Butt?), anyway, I did promise Andre's bottom, so here's that: